The Prep Sports Student Team will feature locals stories researched and enterprised by student reporters from various local schools.
Are you interested in featuring your school on prep sports report? Let us know!
​
Click here to be a student reporter 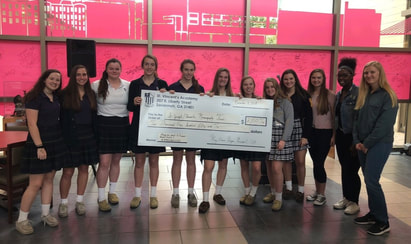 Every year, St. Vincent’s Academy and Calvary Day School go                         head-to-head in volleyball matches.  Both teams dish it out to see who the best team is on the court, but off the court, they have one common goal, raising awareness for Breast Cancer.

Breast Cancer has become the most common type of cancer   diagnosed in women in recent years and at St. Vincent’s, the students want to raise as much awareness as possible for those who are affected by this horrible disease.
Calvary did prove to be the better team on the court, as they won both games playing against the St. Vincent’s Junior Varsity and Varsity teams, but St. Vincent’s never gave up. The girls on both teams worked so hard and we could not thank them enough for the hard work they put into both games. On November 9th, 2018, a check was presented in the amount of $2,450 to the St. Joseph’s Candler Mammography Fund. The money was raised through bake sales, T- shirt sales, concession stand sales, and people who paid admission to the games.

As a senior at St. Vincent’s, I’ve personally seen how over the last four years just how much Pink Night has affected everyone at both schools because they play hard and they want to make sure that everyone who comes to the games, knows what cause they are coming out to support.

​Pink Night has quickly become a tradition at St. Vincent’s that will go on for a very long time.